MAGNOLIA STILL ME was our NEW RELEASE FOR THE 2020 SEASON

MAGNOLIA STILL ME was named by Dementia New Zealand after they approached us to see if we had a magnolia they could adopt as their logo incorporates a stylised magnolia flower.
Every STILL ME magnolia sold contributes $10.00 to fund the work of Dementia New Zealand.
MAGNOLIA STILL ME is a rounded small tree or large bush to about 3m across after 10 years. The well formed warm pink flowers are produced in the later part of the magnolia season. The photo above was taken mid September. The healthy small to medium sized foliage stages a good crop of summer flowers from January to March. The heavy crop of summer flowers helps keep the tree small, but also brightens up the summer garden.

Magnolia Grove was established in 2005 when we moved into the 1965 farm cottage on a blank 8000sq metre property and started planting hedges and magnolia seedlings. In 2008 we obtained a further 32000 sq metres the garden doubled, and the nursery trebled, and this allowed us to increase the range available though our mail order service.

The extra space allowed us the set up a New Zealand Raised Magnolia Collection as a reference for varieties raised in New Zealand, and to use as a benchmark for the hybrids we raise in our breeding program.

In 2009 we opened the garden for the first time for The Waitara Garden Trail, a charity event in January, then the following spring for the Taranaki Rhododendron Festival now called TARANAKI GARDEN FESTIVAL.

Each spring we open on weekends while the magnolias are in bloom from early August until mid November with plants of the best varieties for sale. We are open at other times by arrangement for garden group tours or interested persons who would like to see the collections at Magnolia Grove.

TAKE ADVANTAGE OF THE CLICKABLE RECOMMENDATIONS TO SPEED UP YOUR SEARCH BY CATEGORY.

While our first language is English, we rely on Google to translate to other languages and realise the result may not always be correct. Please enjoy our site.

Magnolias generally dont need a lot of pruning, but if you understand their growth habit they may be modified to fit a smaller growing space than they would normally require. With careful selecting of varieties, pruning will also increase the production of pickable flowers.

All magnolias go through an establishment growth phase which is characterised by open upright growth with few flowers followed by a maturing twiggy phase as the growth slows down to produce a more horizontal, tiered framework with many more flowers. From time to time they will also send up strong growths from the base or the main branches. Some varieties do this more than others, and with grafted plants it is important to know whether these shoots are from the rootstock or the grafted portion. Leaf form is a good guide, but if there is any doubt, these shoots should be removed. These shoots can produce a secondary leader with a very tight fork, which if left to develop can create a weakness that will sometimes split out in strong winds and damage the tree severely. Newly planted magnolias will often produce this type of strong growth in the second or third year from planting, showing they have settled in and are ready to build their branch framework. When this happens you can either leave the strong growth to develop a vertical trunk with a more even framework than the original plant, or if you are happy with the original structure, you should remove them as soon as they appear.

Redeveloping the framework takes about three years or more but it is well worth the effort to enhance the elegant stature of the tree as it matures into a formal framework.

In the first year the older part of the tree should be pruned by about a third to encourage more vigour into the new shoot, and each year after that the old framework should be pruned to allow the new structure to develop evenly. In the second or third year, the old portion may be removed completely, once the new frame is about half the total framework of the tree. Be sure to seal the cut with pruning paste to prevent rot entering.

When older trees produce these vertical shoots they will grow upwards till they reach the canopy then branch out and settle down to flower. If the tree needs to be reduced in size then it can be pruned back to these shoots and pruning paste applied to seal the cut. These shoots will mature faster when the tree is pruned to give them more light.

The overall size of a magnolia can be limited by annual pruning immediately after blooming. As long as the twiggy flowering wood is left and the long shoots and any dead wood is removed, the flower display is maintained on a compact tree. As the illustration shows, cut the longest branches back to a branch to reduce the overall size without getting the haircut look.

On some varieties this annual prune encourages the tree to produce stems which have up to six or eight flowers spaced along them, Apollo, Iolanthe, Denudata and SanJose being among these types.

Alternately magnolias may be limbed up to make shade trees or even timber trees. It is a little more difficult to limit the bushier types to a single stem, but as long as you remove undesired shoots as soon as they appear, they will respond to training. 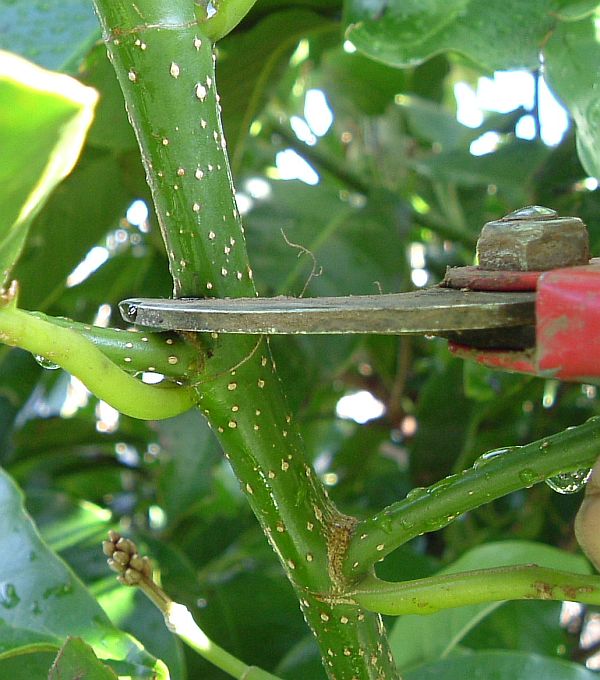